For scientists and laypersons alike, birds have always held a special place in the pantheon of animal forms. Their ubiquity, mostly diurnal habits, often vivid colors, and melodious vocalizations make them particularly conspicuous and charismatic to human sensibilities. Accordingly, they have been at the center of many of the most important conceptual advances in evolutionary biology My research goals follow on that tradition, and center around understanding the processes that have given rise to the phenotypic diversity of birds.*
Below I describe a few of the specific topics I'm currently working or have recently worked on. For a complete and up-to-date list of my publications, check out my Google Scholar profile. Please do not hesitate to contact me if you would like a pdf of one of my works.

sBirds have long been a major focus of sexual selection theory, which explains the evolution of costly ornamental traits such as loud songs, showy plumages, and acrobatic dances. These ornaments are typically more prominent in species with polygamous mating systems, and reach a zenith with lekking taxa, in which males gather to display to females in competitive aggregations and provide no resources to females or offspring other than sperm. Research on the evolution of variation in mating behavior has focused largely on microevolutionary and ecological aspects, which answers the question of what advantage individuals with a certain mating strategy may have over hypothetical individuals of the same species with a different strategy. But these explanations are incomplete without a macroevolutionary view: i.e., what causes lekking or polygamous behavior to occur in some species but not others, considering that the majority of birds are socially monogamous? I am currently gathering mating system and natural history data from existing literature, which I will them use in concert with modern phylogenetic comparative methods to answer that and related questions. This project will also allow insight into other, more general evolutionary questions, such as dealing with Dollo's law and the irreversibility of evolution. 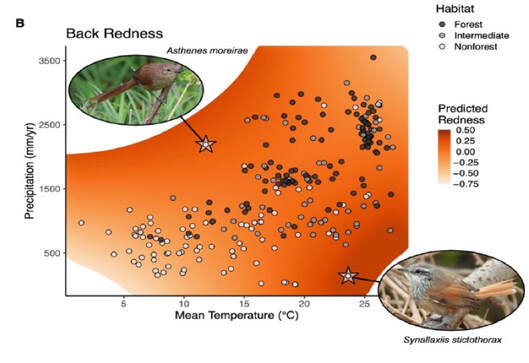 Bird plumage colors were at the center of a disagreement between Charles Darwin and Alfred Russell Wallace about the relative roles of natural and sexual selection. Darwin emphasized the showy colors of males of many bird clades, and used his theory of sexual selection to explain their origin. Wallace, on the other hand, was more intrigued by the often more subdued color of females in the same clades, and attributed them to natural selection for enhanced crypsis. Ever since Darwin and Wallace, most research into the evolution of bird color a has taken “Darwinian” approach—that is, asking questions about the role of sexual selection in producing conspicuous colors, often only in males. But most birds are in fact fairly drab and sexually monochromatic. So have I taken a more “Wallacean” stance and ask questions about the ecological and genetic drivers of variation in drab bird colors. I use as a study system the Furnariida are a clade of more than 1,000 species of passerine birds that occupy essentially ever habitat type in the Neotropics. They include, among others, the antbirds, horneros, woodcreepers, antthrushes, gnateaters and tapaculos. Their colors vary greatly in brightness (the light-to-dark spectrum), but little in hue (the actual color), and, making them particularly interesting from an evolutionarily perspective, they include sexually dichromatic as well as monochromatic lineages. With help from a number of very hard-working undergraduate students at LSU, and taking advantage of the world-class ornithological collection at the LSU Museum of Natural Science, I have generated reflectance data from more than 3,000 specimens, amounting to a dataset that is 90% complete at the species-level. Using phylogenetic comparative methods, I then showed that the dorsal and ventral plumages of birds in this clade are under very different evolutionary regimes and, unexpectedly, that in the sexually dichromatic lineages, male and female plumages are evolving under similar rates. Next, I teamed up with good friend and co-first author Jon Nations to disentangle the roles of light environments and climate (Gloger's rule; see below) in driving plumage color evolution in the family Furnariidae. We found that those two selective pressures have separate but complementary effects in driving macroevolutionary patterns of plumage color variation in birds.
(Photo creds above: Asthenes moreirae, Nigel Voaden, CC BY-SA 2.0; Synallaxis stictothorax, © Roger Ahlman.) 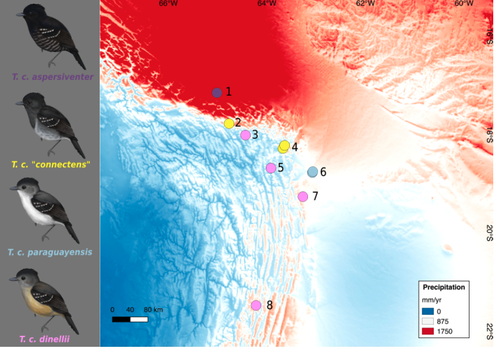 The English name of this small South American passerine is evocative and very apt. Across its vast distribution, the Variable Antshrike includes forms whose plumage color varies from essentially all-black to almost pure white, including also various shades of grey and brown. In the early 2000's, my PhD advisor and co-author Robb Brumfield had the foresight of identifying this as an interesting system from an evolutionary perspective. He collected more than 100 specimens in south-central Bolivia, where very disparate plumage types come into close geographic contact, and used mitochondrial DNA to show that these subspecies are undergoing rampant hybridization. For my PhD, Robb and I figured it would be fun and informative to go back to these specimens and tissue samples and analyze them with modern tools that weren't available to Robb at the time. So far, I have been able to quantitatively show, using reflectance data, that the degree of plumage variation in this species is in fact exceptional when compared to other members of the family Thamnophilidae. We have also shown that this variation is partially consistent with Gloger's rule, a classic ecogeographical rule that relates animal color to climatic variation: as predicted, these antshrikes tend to be darker in rainier areas but, contrary to expectations, they are not darker in warmer places. Finally, in close collaboration with Gustavo Bravo and Scott Edwards at Harvard University, I have  generated low-coverage whole-genome resequencing libraries from a large number of individuals, and I'm currently working my way through the resulting mountain of genomic data to try and figure out the population structure of the Bolivian populations of this species and the genomic basis of its impressive plumage variation.
(Above are original digital illustrations of the Variable Antshrike by Subir Shakya) 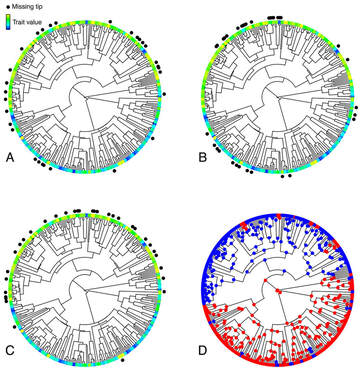 I'm an avid user of phylogenetic comparative methods (PCMs), a powerful set of tools that uses phylogenies to answer questions about the evolutionary processes that have generated biological diversity. One of the most challenging but also most intellectually stimulating aspects of using PCMs as an empiricist is confronting a multitude of small practical decisions that have to be made about how exactly to tailor my data and questions to the available methods. Often I have found that there is little published guidance on how to go about making those decisions, or whether or not certain shortcomings of empirical data may have detrimental effects on the inferences we can make. For example, while collecting data for my work on the macroevolution of plumage color in the Furnariida (see above), I noticed that the species that were missing from my dataset (due to their rarity in museum collections) tended to be clustered in just a few genera. I wondered if that presented a problem for the performance of the models of trait evolution I planned to use. Intrigued, I conducted a set of simulations to address that question. The results of those simulations are  here. In short, they show--to my surprise-- that that missing taxa, even when phylogenetically clumped, seem to have bad effects on model performance only under very specific circumstances. In the future, I hope to continue pursuing this line of research, addressing other practical questions relevant to the empiricist using PCMs. 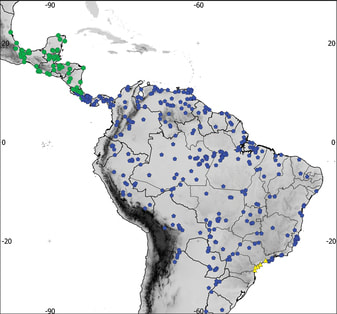 For my  MSc research working under Luis Fabio Silveira at the Zoology Museum of the University of São Paulo. I used characters of external morphology and vocalizations to review the systematics of the genus Aramides, a small group of rails with a wide distribution in the Neotropics. The main result of this research was the demonstration that what was previously considered a single species, the Grey-necked Wood-rail, is actually two species, the Rufous-naped Wood-rail (A. albiventris) and the Grey-cowled Wood-rail (which retained the Latin name A. cajaneus). These two species have parapatric ranges separated by the mountains of the Costa Rican volcanic front, and are distinguished by fixed characters of song and plumage color. One of the proudest moments of my career so far came when the ornithological powers-that-be decided to accept my proposed split. The many many hours I spent staring at hundreds of specimens during this research ignited my interest in understanding the causes of subtle plumage color variation between species and populations, which later on became the topic of my PhD dissertation.